Each year, Nelson Mandela Day calls on us to donate 67 minutes of our time…during the Nelson Mandela Day Team Build Week, over 2 700 volunteers joined hands to serve a combined total of 16 200 hours in service to 54 families who have held their shelter challenges up in prayer for so long.

This year, Habitat SA partnered with the Nelson Mandela Foundation (NMF), Government, Corporates and many other smaller companies to build 54 homes for deserving families. The build event took place in three provinces namely Gauteng, Kwazulu-Natal and the Western Cape.

“We need to restore and reaffirm the dignity of the people of Africa and the developing world. We need to place the eradication of poverty at the top of world priorities. We need to know with a fresh conviction that we all share a common humanity and that our diversity in the world is the strength for our future together.” – Nelson Mandela

The houses were constructed by various construction partners and volunteers from the financial services sector, construction industry, education, to name a few. Habitat SA and NMF are joining hands by acting against housing poverty. The partnership is based on Habitat SA’s over-arching developmental approach of People-Public-Private Partnership (P4) and the NMF’s poverty eradication pillar of shelter and infrastructure.

Habitat SA has become increasingly aware that a more collaborative approach is needed towards capacitating and building local leadership within communities. In order to achieve our goals, we know that successful development is underpinned by strong partnerships. It is no longer feasible (nor desirable) for Governments, NGOs, non-profits or the private sector to work in isolation to tackle poverty.  It is only by working together and walking alongside marginalised communities that we can empower the poor to be the change they wish to see in their lives. Partnerships are therefore the key to the overall success of our new plan; we recognise the collective power that people working together have to bring about change in our country and our world.

In celebration of 10 Years of Making a Difference, the NMF used the occasion to announce their new strategy of ‘being facilitators of processes’ ensuring that those who want to do something really meaningful are connected to a cause that they can support. The provision of safe shelter for families to live and thrive in and the elimination of homelessness are two of the key goals that the Foundation has identified as part of its #TheNextChapter strategy.

Habitat SA serves to highlight the plight of the poor in their struggle to gain access to decent housing and well-balanced communities.  It is for this reason that we partner with communities beyond the physical shelter. We form long-term relationships and assist communities to establish reputable leadership structures. We educate beneficiaries through workshops, public engagements and horizontal learning programmes. Our training programmes are community specific and focus on the various aspects and responsibilities of home ownership. 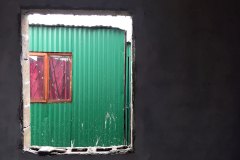 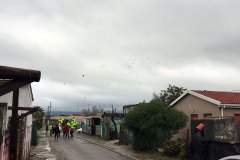 Download our vision for building this thriving community: [link]

Mrs Lolo Cathrine Msomi (85) is currently residing in uMbumbulu , eMphusheni in Ward 100. She has lived here since 2004.

Gogo Msomi is a widow, her husband passed away in 1978. They had six children; Zandile, Sbongile, Jabulani, Khumbulani, Fikelephi and Scelo Dube (deceased). Gogo Msomi is on chronic medication for high blood pressure. She receives her medication from the nearest clinic in Folweni.

Gogo Msomi is a pensioner and she is in receipt of an Old Age Pension of R1700.00 per month. She currently resides with her daughter, Ms Fikelephi Dube (unemployed) and her three grandchildren; Lindani (23), Sphumelele (14) and Samkelo (12).

The storms of April 2019 destroyed Gogo Msomi’s shack. It was then that she moved in with her daughter’s family. “My house was destroyed by heavy rains in April, and my daughter took me in. In that house I was not safe, the structure wasn’t stable and young boys would break in and demand my pension money.”

“I would be happy to get a house from Habitat for Humanity SA at this age. I have been waiting a long time for such a moment. My heart will be at peace and I will spend Christmas in a beautiful house,” Gogo Msomi displays obvious excitement.

Mrs Busisiwe Ndlovu (91) is a pensioner, born in uMbumbulu, eMphusheni Area in Ward 100. Mrs Ndlovu was married to Nonguze Ndlovu who tragically passed away soon after they got married. The couple had seven children, of whom two are still alive, Duduzile and Ntombizonke.

Mrs Ndlovu recently buried her son in May. “My children are married. I am all alone,” she tells us.

Mrs Ndlovu’s house is not in a good condition and it is not safe for her to stay in at her age. The door of the house does not lock and the roof leaks. It is feared that the structure can be blown away by heavy winds at any time.

“I am living in fear for my life, I know that thugs can come any time and attack me. I can’t lock the door. I put the brick to keep it closed during the night. I have been waiting for a house my whole life, I don’t want to die in this house. I want to die and be buried like a normal person. I would love to stay in a beautiful house, then God can take my life after,” Mrs Ndlovu says.

Thulani Majambe (42) and his wife Nomveliso (38) moved to Wallacedene from the Eastern Cape 19 years ago in search of employment but have since failed to secure permanent employment. As a result, the Majambe family has been unable to build themselves a proper house. Thulani works as a temporary security guard at night in a nearby shopping complex and Nomveliso is unemployed. The Majambe family barely makes enough money to support themselves and to remit to their family in the Eastern Cape. They currently live in a one bedroom shack which they now share with their new born baby, Ahlumile (2 months).

Their current shack has no proper insulation and often leaks when it rains. The weak and unstable walls allow cold wind in at night and dust enters from outside. The family is worried that this could be a health hazard for their baby. With no proper doors or a fence around their yard, the family feel very unsafe and vulnerable to petty theft.

After 19 years of waiting and almost giving up on the dream of a home, the family is very grateful that they will be receiving a new brick house. Thulani says that, “a brick house will mean a lot to us and guarantees better health and safety for our baby.”

The family is very optimistic that their lives will be much easier going forward.

Noxolo Mngonyama (38) lives in Wallacedene with her two daughters, Amahle (17) and Othalive (1). Noxolo moved to Cape Town to find employment and to join her uncle, Sam (65) who has since moved back to the Eastern Cape because of limited space in their two-roomed shack. Noxolo is currently unemployed and depends on a social grant to support her daughters and aging uncle.

The informal shelter has no ventilation (no windows) and is full of holes which causes rain water leaks which often leave their floor wet. Noxolo is also worried about her daughters’ safety. She would like to bring her aging uncle back from the Eastern Cape so that she can take better care of him but could not because of their current house condition.

The family has been on the government waiting list for over 17 years and are excited that their wait is finally over. According to Noxolo, this is “an important occasion because it means that for the first time in our lives my family will live in a decent and proper house.” She also believes that this will afford each family member some privacy and offer her children some security.

We would like to thank our partners on the many successes that we enjoyed during this week. A very special thank you to ER24, Gavin Thomson, Monique Savaun Theron-Whiting and African Exposure Tours for the continued and excellent support that you provide on these Build Events. We are so deeply grateful.