A Home for Lulama

Through partnership, a domestic worker’s lifelong dream of owning her own home is finally a reality as her employer hands over her keys.

During the week of 24 January, Global Village volunteers from Thrivent in the US joined hands with Habitat for Humanity South Africa, Lulama Gomana, and the Path to Health team; Dr Raoul Goldberg and Dana Smirin, to build Lulama her first proper home. On 21 February, Lulama received the keys to the door that opens on to her family’s future, full of dignity and renewed promise.

Lulama Gomana, (54) is a single parent who has raised a thriving family despite the 21 years of hardship that she endured living in a shack. The structure had three rooms and due to space restrictions, the children slept in the kitchen. The structure leaked when it rained and took in sand when the Cape winds blew. In winter, the shack was cold due to a lack of insulation. Soon however, the shelter concerns that used to keep Lulama awake at night will be a thing of the past.

After more than 20 years of loyal service, Dr Raoul Goldberg describes Lulama as ‘the heart of the [Path to Health] practice”. Once he became aware of Lulama’s shelter reality, he decided to donate a portion of his own pension savings and to mobilise support to change Lulama’s living circumstances. Dana Smirin contacted Habitat for Humanity SA with their request to facilitate bringing together hands, hearts and resources to build strength and stability for the Gomana family.

The experience for all involved has been nothing less than transformational. Build volunteers had the privilege of sharing the daily experience of Lulama’s family’s comings and goings on site: commiserating with her young grandson, Mingcobo (7), after a trip to the dentist; Iviwe’s (9) daily face paints; interviews on Lulama’s old bed as the roof dripped rainwater from the weekend before; and fellowship over her homemade steamed bread. Messages of encouragement and blessings now live within Lulama’s new walls – each person who contributed to her new home, literally having left their mark on her life going forward.

Lulama is without words to express the gratitude that she feels toward those who have made her shelter dream a reality.

Dr Raoul and Lulama’s story has encouraged other employers to start a conversation with their domestic workers and Habitat for Humanity SA has been receiving emails requesting how others can do the same. South Africa is a country with much diversity and many challenges; but when it counts, may no one ever fault it on its incredible resilience of heart. 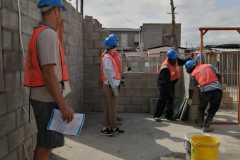 If your employee owns a serviced site/land and needs assistance with building the top structure, there is something that you can do to change their family’s lives for generations to come. Contact Habitat for Humanity SA to find out more about Habitat SA’s Domestic Worker Employer-supported Housing Project and let’s see what we can build together: [email protected]